Given a non-empty array of integers nums, every element appears twice except for one. Find that single one. You must implement a solution with a linear runtime complexity and use only constant extra space.

If the problem was given in a sorted array we can implement this binary search approach. But here the array is not sorted. We can use a dictionary but it'll take more space.

Only other way of solving this problem is to use XOR operations. For each element in the array if we XOR them with each other we can find the odd one out.

Implemented naively, quicksort has large run times and deep function call stacks on arrays with many duplicates because the subarrays may differ greatly in size. One solution is to reorder the array so that all elements less than the pivot appear first, followed by elements equal to the pivot, followed by elements greater than the pivot. This is known as Dutch national flag partitioning, because the Dutch national flag consists of three horizontal bands, each in a different color.

Given an array of n objects with keys that takes on of four values, reorder the array so that all the objects that have the same values appear together. \(O(1)\) space and \(O(N)\) time.

Implement a method to perform basic string compression, like "aaaabbbcccaa" \(\to\) "a4b3c3a2"

You want to maximize your profit by choosing a single day to buy one stock and choosing a different day in the future to sell that stock.

Return the maximum profit you can achieve from this transaction. If you cannot achieve any profit, return \(0\).

Similar to the previous problem, you are given an integer array prices where prices[i] is the price of a given stock on the ith day.

On each day, you may decide to buy and/or sell the stock. You can only hold at most one share of the stock at any time. However, you can buy it then immediately sell it on the same day.

Find and return the maximum profit you can achieve.

Similar to the previous problem we'll continue to implement the logic but, if we see a dip later in the future, we'll sell off and buy at tomorrows dip to avoid any potential loss.

Here profitInCurrentWindow in the code denotes the profit in the current window. An window is reset when we sell off the stock because there will be a dip in the next day. We start the window by buying the stock in the next dip.

Same Problem on Leetcode \(\to\)

Return intervals after the insertion.

Find the problem on Leetcode \(\to\)

Given an array nums containing n distinct numbers in the range [0, n], return the only number in the range that is missing from the array.

Given an array nums of size n, return the majority element. 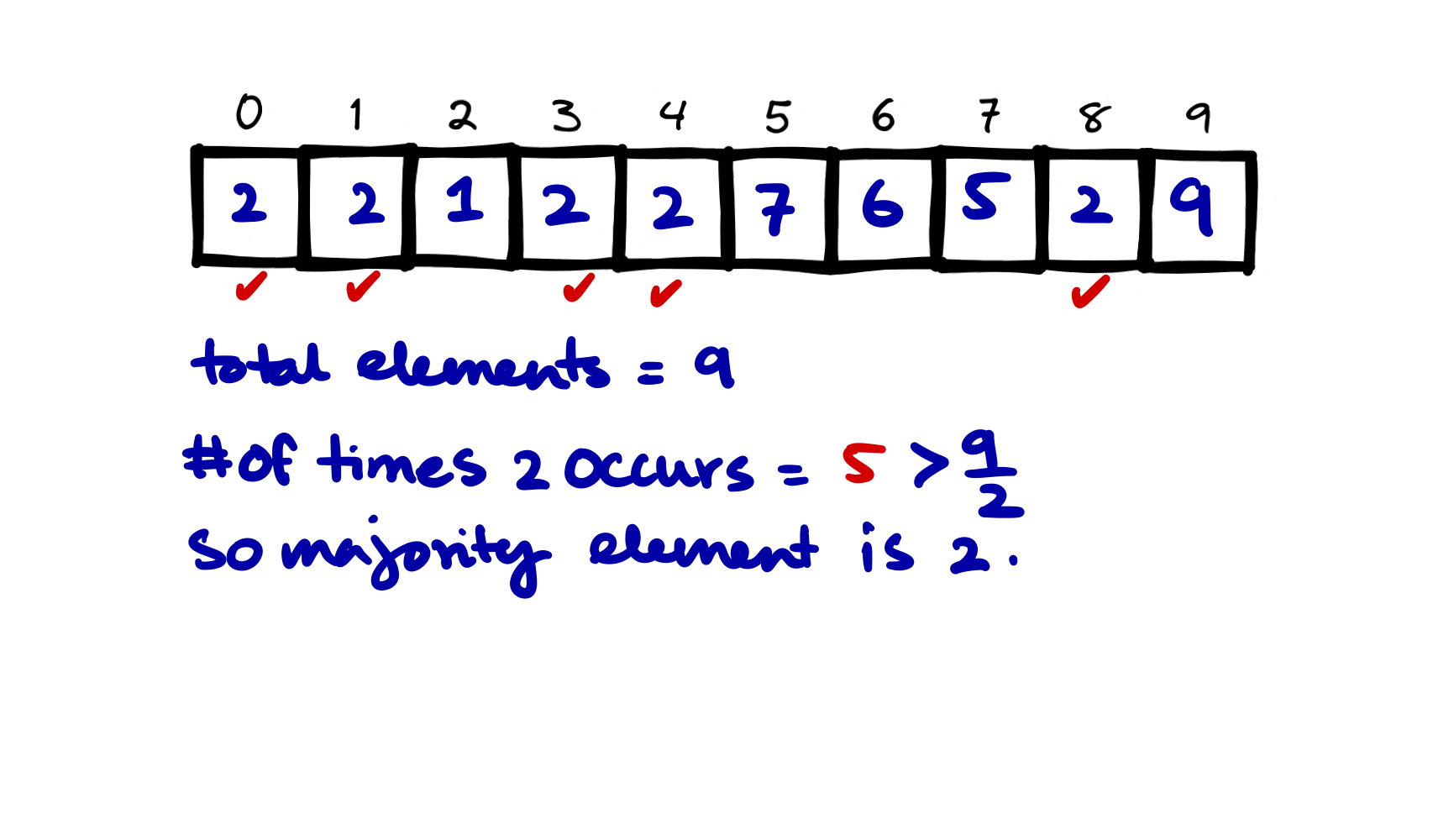 Running the algorithm on the example 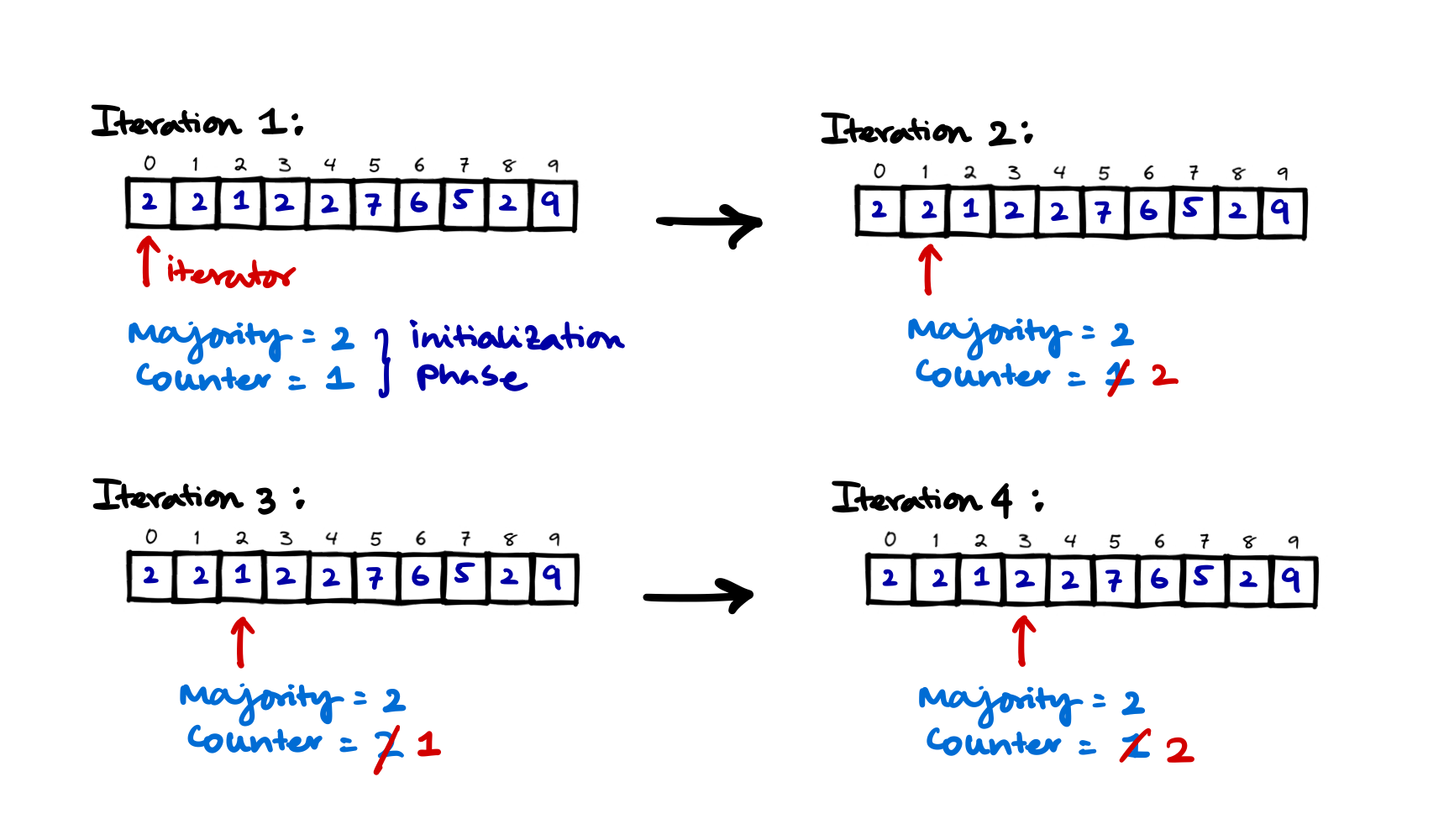 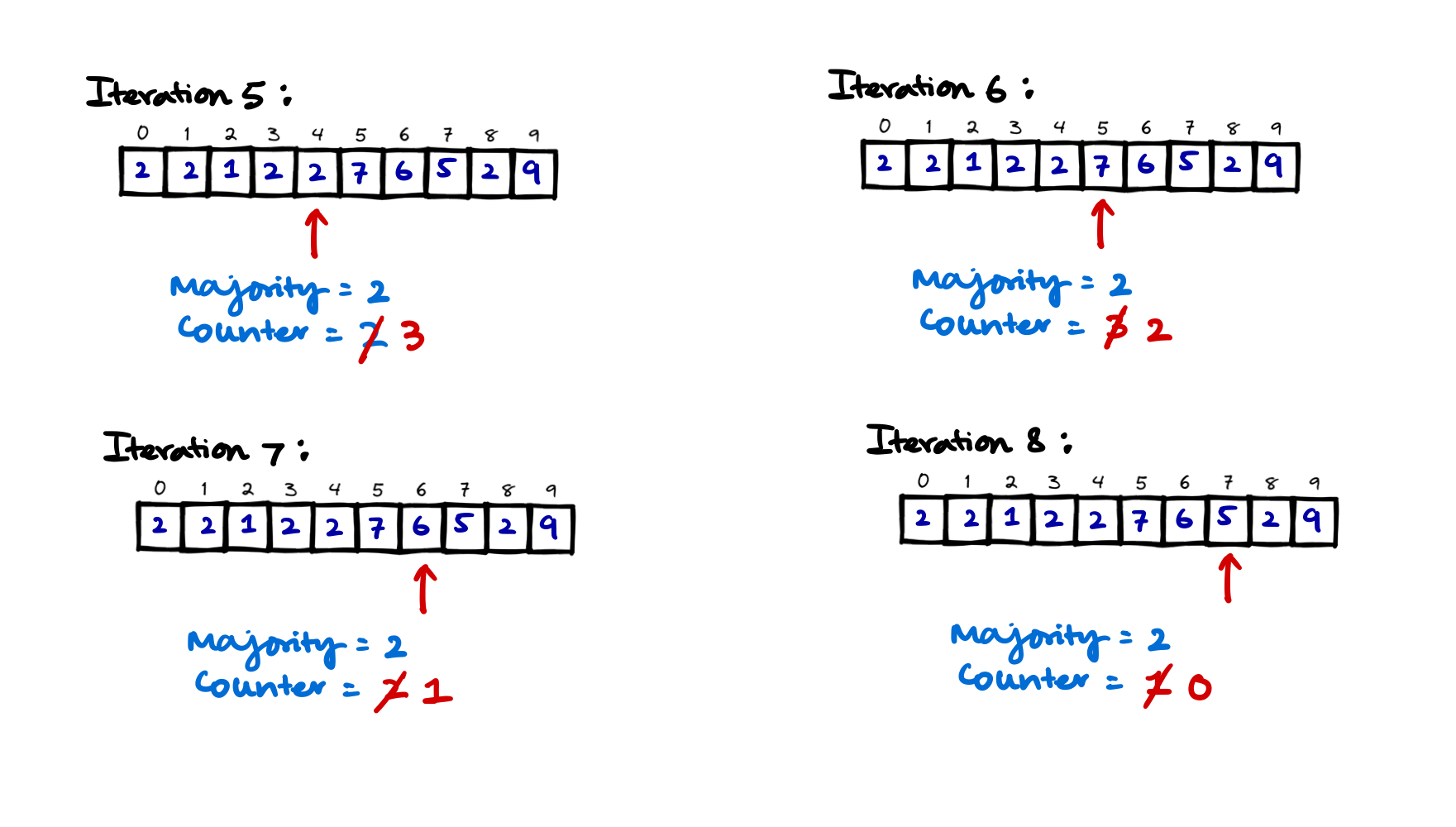 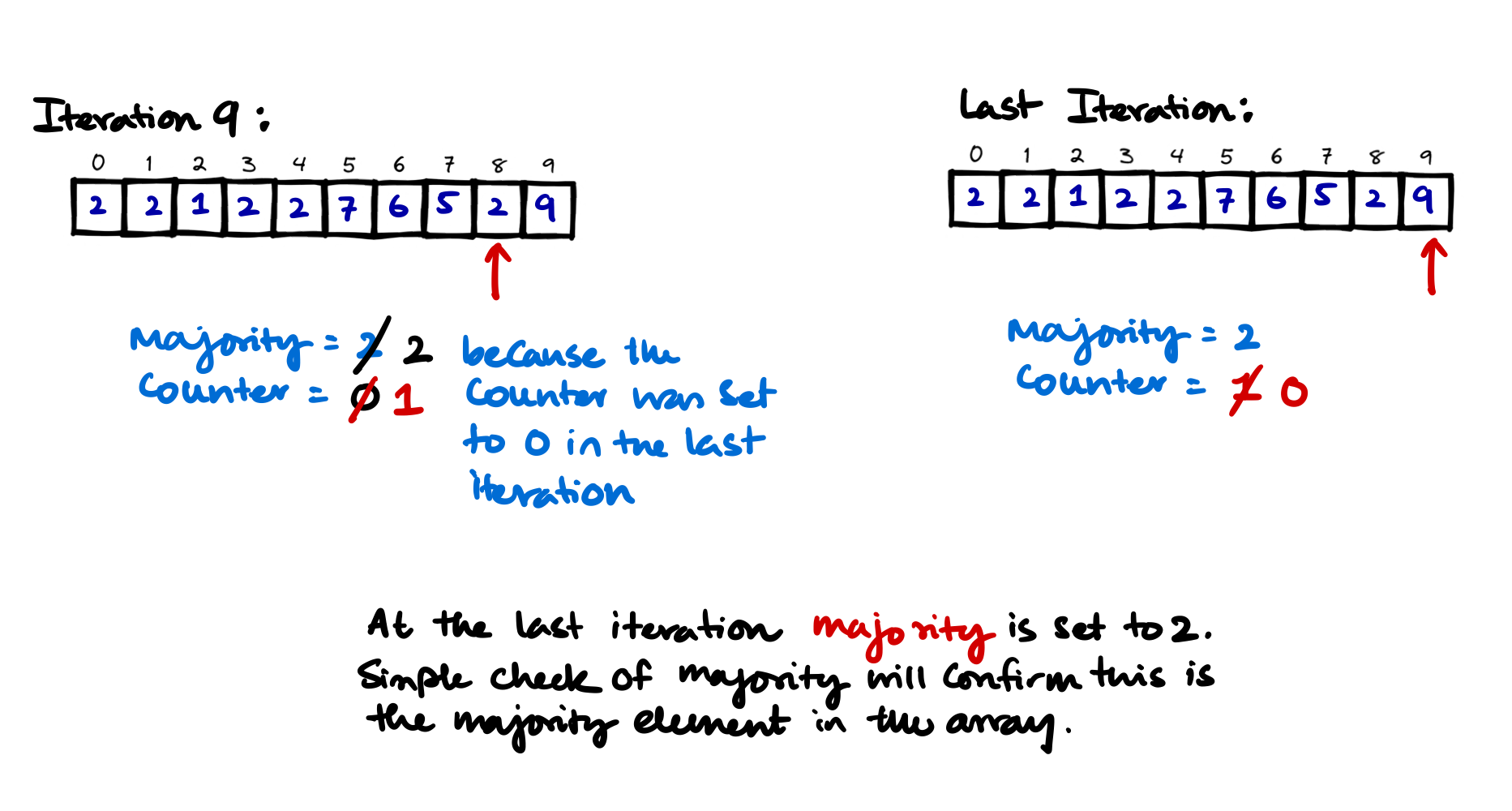 Given an array, rotate the array to the right by k steps, where k is non-negative in constant space and linear time.

Not so much of an optimized approach, will fetch you a TLE. But for understanding it is a great apporach. We convert the k rotation problem into a subproblem of rotationOnce() for k times. We implement the rotationOnce() subroutine like this:

Here is a code using this approach

The code here will not run in a reasonable amount of time for a sufficiently large input size. So we have to design some better algorithms.

Instead of using the rotate once subroutine we can store all the last k elements in some temporary array, then instead of shifting one element once to the right and putting the last element to the front we can

Without extra space and linear time complexity in \(n\)

There is a very ingenious solution to the problem. I'll explain this with diagrams and will give you an working C++ code.

The approach to get the solution goes like this:

Dry run on some example

Dry run on that example 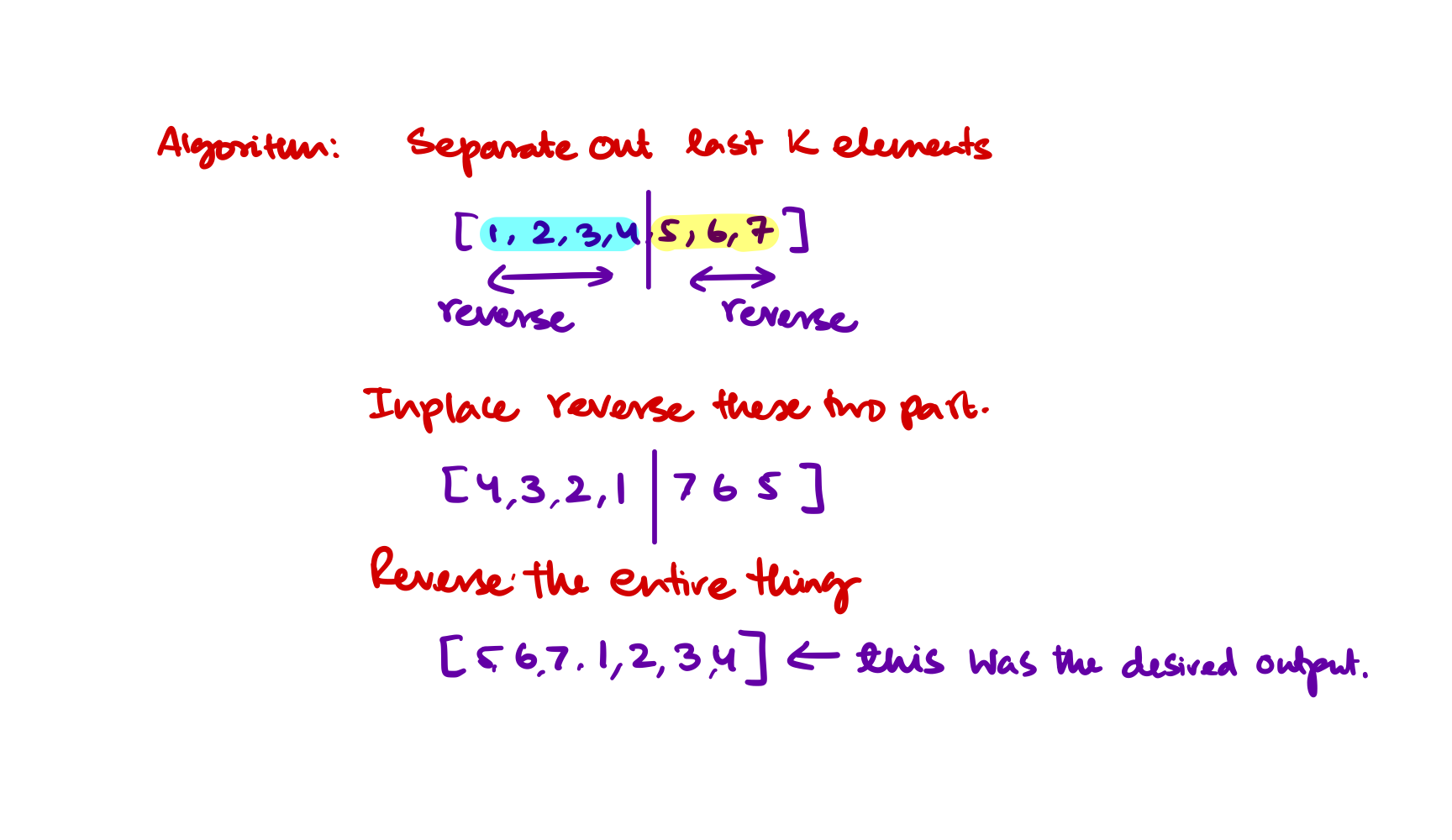 How Many Numbers Are Smaller Than the Current Number

Return the answer in an array.

Using a non comparison based sorting algorithm we can reduce the time complexity even further down to \(O(n)\).

Given an integer array nums, move all the even integers at the beginning of the array followed by all the odd integers.

Replace Elements with Greatest Element on Right Side

Given an array arr, replace every element in that array with the greatest element among the elements to its right, and replace the last element with -1.

After doing so, return the array.

Given an array nums with n objects colored red, white, or blue, sort them in-place so that objects of the same color are adjacent, with the colors in the order red, white, and blue.

We will use the integers 0, 1, and 2 to represent the color red, white, and blue, respectively.

You must solve this problem without using the library's sort function.

This is how the array becomes sorted without the usage of sorting function.

Given an m x n integer matrix matrix, if an element is 0, set its entire row and column to 0's. You must do it in place.

Leaders in an array

Problem on Coding Ninjas \(\to\)

Given a sequence of numbers. Find all leaders in sequence. An element is a leader if it is strictly greater than all the elements on its right side.

Count the number of inversions in an array

Find the problem on GeeksForGeeks \(\to\)

Given an array of integers. Find the Inversion Count in the array.

Code for this approach

Using this code passes 100 / 117 testcases in the gfg platform. So we need to optimize this further.

The following is a more optimized solution to find the number of inversions in the array, which takes a but lesser time so that we don't get any TLEs.

We'll use merge sort to do this. During the merge sort we'll run some subroutine that'll calculate the number of inversions. This will take \(O(n \log n)\) time which is faster than \(O(n^2)\). So understanding the merge sort is a critical component solving this problem.

Problem On Leetcode \(\to\)

You have to rotate the image in-place, which means you have to modify the input 2D matrix directly. DO NOT allocate another 2D matrix and do the rotation.

Product of Array Except Self

Given an integer array nums, return an array answer such that answer[i] is equal to the product of all the elements of nums except nums[i].

We can easily come up with a \(O(n)\) solution with \(O(1)\) memory complexity by just multiplying all the numbers of the array and divide them by the element at the current index. We should create provisions to handle Divide By Zero cases which you can see in the code below.

Code for without the division approach

A Better in-place solution (most optimized)

Find the Problem on Leetcode \(\to\)

Given a 1-indexed array of integers numbers that is already sorted in non-decreasing order, find two numbers such that they add up to a specific target number. Let these two numbers be numbers[index1] and numbers[index2] where \(1 \le\) index1 < index2 \(\leq\) numbers.length.

Return the indices of the two numbers, index1 and index2, added by one as an integer array [index1, index2] of length 2.

The tests are generated such that there is exactly one solution. You may not use the same element twice.

The solution must use only constant extra space.

Container With Most Water

Find the problem on Leetcode \(\to\)

You are given an integer array height of length \(n\). There are n vertical lines drawn such that the two endpoints of the ith line are (i, 0) and (i, height[i]).

Find two lines that together with the x-axis form a container, such that the container contains the most water.

Return the maximum amount of water a container can store.

Notice that you may not slant the container.

Same Problem on Leetcode \(\to\)

Given \(N\) non-negative integers representing an elevation map where the width of each bar is \(1\), compute how much water it can trap after raining.

Find the problem on leetcode \(\to\)

Given the root of a Binary Search Tree and a target number k, return true if there exist two elements in the BST such that their sum is equal to the given target.

Determine if a 9 x 9 Sudoku board is valid. Only the filled cells need to be validated according to the following rules:

Note A Sudoku board (partially filled) could be valid but is not necessarily solvable. Only the filled cells need to be validated according to the mentioned rules.

Find the problem on Codeforces \(\to\)

Being a programmer, you like arrays a lot. For your birthday, your friends have given you an array a consisting of \(n\) distinct integers.

Unfortunately, the size of a is too small. You want a bigger array! Your friends agree to give you a bigger array, but only if you are able to answer the following question correctly: is it possible to sort the array \(a\) (in increasing order) by reversing exactly one segment of \(a\)? See definitions of segment and reversing in the notes.

Output Print "yes" or "no" (without quotes), depending on the answer.

If your answer is "yes", then also print two space-separated integers denoting start and end (start must not be greater than end) indices of the segment to be reversed. If there are multiple ways of selecting these indices, print any of them.

This comments system is powered by GitHub Discussions